I can show you the world: shining, shimmering, splendid
Tell me, princess, now when did you last let your heart decide?
I can open your eyes, take you wonder by wonder
Over, sideways, and under on a magic carpet ride
ZAYN & Zhavia Ward – A Whole New World (Aladdin 2019 OST)

Short story time! I went through different ideas in my head for this before I landed on what you see above. Originally I didn’t even have a song I wanted so the first idea ended up not fitting at all once I decided on the song. You’ll see that one eventually but not today. Then I had another idea that more closely resembled the video. I toyed around a bit with it but it wasn’t right. I went to bed with no idea and while I was laying there this idea popped into my head. It’s not normally what I do but it actually fits well, at least for me because really home is a whole new world now. This will probably also be the first post to not feature credits because I’m just not that crazy.

This is probably the spot where most people think “ok everything is good now so I don’t have to try as hard” but that’s not me, nor has it ever been. You’ve seen me say it time and time again that a relationship is always a work in progress and if any point it stops being one then someone in that relationship is failing it. I’ve made that mistake before years ago. Sure I’m not perfect so anything could happen. But I don’t think that’s in these cards this time around. I don’t normally delve into certain things but I’ll tell you this much, she’s amazing, and I am extremely grateful to have her in my life.

I know full well that I have a lot to prove. Not only to myself, and to her, but to anyone else that is anyway connected. I keep a very small circle of people whom I trust. We all kind of have that in some form or another. Some are bigger, some are smaller, but we’ve all got something. Well my circle up to now has pretty consistently been about three people wide. They know who they are and they are the people that I have trusted to tell me the truth even when I didn’t care to hear it. I may not love it but I respect when someone doesn’t bullshit me. We all need those people who are willing to piss you off because they know you’re screwing something up. They’ll put their friendship with you on the line to try and keep you from burying yourself. Never think that you won’t need that. You will. Someday.

I find myself in a pretty damn good spot at this very moment in time. My circle is now a little bigger, with someone who will most definitely tell me I’m stupid as hell if I need to hear it. It’s mutual and important. It’s a different dynamic because I’ve never been the social butterfly but I’m working on changing that as much as I can. I have often wrote about closing chapters and opening new ones. I like that way of putting it because it does the fit the idea of a blog and I’m sure I will still use that point again. What I’m doing now though isn’t just opening a new chapter. No new chapters this time. It’s an entirely new book. When I said I finally felt clean from everything before this is what I meant.

Sure I will look back on past mistakes and do my best to not repeat them. It would be foolish not to. But what I don’t want is all of the past stuff clouding the future anymore than it had before. It’s done. There is no going back, there is no want to go back, and I think for the first time it’s completely true. This story is just starting and I want it to have it’s very own place, not just part of something that existed already. I know full well that I’ve got some work to do. It’s time to prove it, to earn trust, and show that I’m not just my words.

I think I started that in earnest at Prom and I plan to continue to do so for as long as it may be to anyone that I have to. -This- matters that much to me, so those of you who took the time to reach out, thank you. Thank you for caring, thank you for showing me the kind of people that you are. You may not realize it, but I genuinely appreciate seeing that you are those kind of people. I promise you that I won’t let you down, that what I said was the truth and I’ll prove it at every single turn. I look forward to meeting more people and maybe my circle ends up bigger than it has been in a very long time.

I think as most of us do, bloggers at least, we tend to kind of stick to ourselves, our platforms, our space, whatever it may be. It’s not that we don’t want to get out there we just are who we are. You get into that routine and it kind of just repeats and by the time you think you should change it, it’s damn near impossible to do on your own. You might think “I don’t know if any of these people would like me, let alone talk to me.” I know it because I’ve done that. But something I knew, and something that’s been very well reinforced lately is without taking the risks you’ll never know either way. Not everyone will like you. Some might take time to come around. Some may not at all and that’s ok too. Not everyone has to like you nor do you have to like them. But try.

You never know what’s going to happen. Let’s stop being married to our platforms. Sure nothing will ever be perfect but change doesn’t happen without you. Break -THIS- glass. I learned at Prom that there are plenty of other really good people out there who really do have the best intentions and I could tell just by talking to them for a short amount of time. Don’t be afraid to do it, you’re more than your platform, more than your photos, more than whatever that small space of yours is. Trust that if it goes wrong that your circle will be there for you, maybe to help pick you up or to tell you where you fucked up.

Go for it because in the end what do you have to lose? Feelings get hurt? They’ll get better. Not everyone deserves you and you’ll figure that out if you pay attention to not only what they do but what they say. If you put in the effort and they don’t then what do you think that means? Sure you could read that as a rhetorical question but I’m not intending for it to be. If you’re trying but they aren’t, then your commitment to them is more than theirs is to you. Maybe that’s okay to you, but it would not be for me.

Everyone’s circumstances are different and they always will be different, but don’t settle for less than you think you deserve. Go after it. Make the changes you need to make, in the end the best person to look out for you is you. Because if you don’t then no matter what your circle says to you, you won’t believe it.

I’m like a shooting star, I’ve come so far
I can’t go back to where I used to be
A whole new world, with new horizons to pursue
I’ll chase them anywhere, there’s time to spare
Let me share this whole new world with you
ZAYN & Zhavia Ward – A Whole New World (Aladdin 2019 OST) 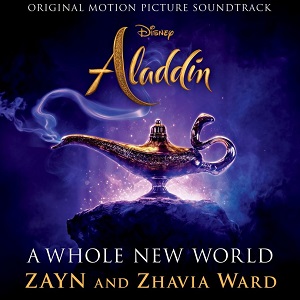 Oh shit. No credits what? You look at all of that and tell me you’d sit and credit every single thing…that’s what I thought too. I will say if I failed to mention it that home never looked more like home than it does now. She really -is- that good.