Whispering of names, faces
Uniforms I’ve worn
And all that is gone
Always climbing
To fall down again
Holding onto everything
It’s not what it seems

This post actually was inspired by a couple of things in the span of one night. Oblige me for a short story. The other day I was thinking ideas over for another that post that I’ll need to get to when my SL brother Brennan sent a message. He was wondering if I’d played a gacha at Anthem, and admittedly I had to reply that I didn’t even know it was there. Now it’s more likely because I went to Anthem at like 2am the night it opened and probably missed more than I saw. But he pointed out that the new gacha from ..::THOR::.. was very much something he and I would both love.

The Junkhead gacha is so very Alice In Chains inspired and I’ll be honest and say I completely overlooked it when I was there the first night. I went back and, well you know me, once I try a gacha I set out to get it all. It took some work as they all do, but in the end I managed it. It led to me reaching out to it’s creator Andraus Thor to commend him on a set that really called me back to band I hadn’t listened to as much lately. We had a very good conversation and actually seem to have a fair bit in common, especially music taste. It’s always great to find someone who likes things you do, it’s even better to find someone you’ve never talked to and find that as well genuine care and appreciation for a customer. We spent a good half hour chatting and I thank him again for the kindness and conversation we shared.As we talked I really got the itch to do something, anything, that fit the vibe of that era/type of music and incorporate what I considered to be some awesome items that brought me right on back to those earlier Alice In Chains days. The “Angry Chair”, the “Facelift Lamp”, the “Mike Amp”, the different “Jerry Guitars”, and of course the “Layne Microphone.” If you know AIC, and I’d think almost everyone knows at least one of their songs you know the meaning behind these items. 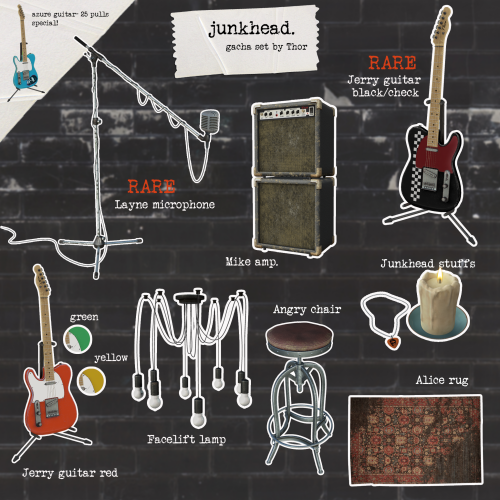 On the off chance you don’t let’s do some history lessons. The Angry Chair ties back to AIC’s song Angry Chair from their 1992 album Dirt. The Facelift Lamp ties back to their album Facelift from 1990. The Mike Amp is either reference to Mike Starr or Mike Inez. Both played bass guitar for the band, Starr from 1987-1993, Inez from 1993-2002/2005-Present. The Jerry guitars are obviously those of Mr. Jerry Cantrell himself. Jerry has done lot outside of AIC but he’s probably the biggest pillar of what makes Alice In Chains what they are. Lastly, and certainly not least we have the Layne Microphone. That microphone is that of none other than Layne Staley himself. Layne was an exceptionally recognized voice and his sound combined with that of Mr. Cantrell helped pave what became Alice In Chains sound.

Layne had a very unique voice that is so easily distinguishable that I would put up there with that of Chris Cornell. You just KNOW it’s Layne when you hear him. Tragically he passed away on April 5, 2002 due to a mixture of heroin and cocaine (also know as a speedball). His body was not discovered until April 19, 2002 but the autopsy concluded April 5 is being the date he left this world. It was later revealed that he had attempted rehab 13 times, though the time frame of when they were is not clear. In my circle his death is less mentioned then that of Kurt Cobain, and I’m sure that’s just a matter of preferences to Nirvana vs Alice In Chains. Either way I look at the world losing two masterful musicians far too soon. It’s a trend that continues today and to me it just shows the amount of money in your bank account doesn’t equate to that person being happy.

Alice In Chains never formally broke up, throughout all of the issues and time that had passed. They had down years where they weren’t active but it was more of a hiatus. The current iteration of AIC consists of Jerry Cantrell (lead guitar/vocals), Sean Kinney (drums/backing vocals), Mike Inez (bass/backing vocals), and with Layne having passed on, William DuVall was officially brought it for vocals/rhythm guitar. William is no Layne, but I think that’s what works for him. He can sing the older songs but he still makes them his own. I recall reading that the band didn’t want a Layne clone because no one can be Layne. His legacy remains as it stands. William just happened to come in and show his stuff. The group was convinced quickly that he was -the- guy to do the job and the search pretty much ended there.

Oddly enough the seed that sprouted into DuVall landing the job was planted in 2000 while Layne was still with us. The idea of him taking the job didn’t come up until later one. Jerry had met him through a mutual acquaintance, William’s prior band Comes With The Fall had just released their album in 2000. Jerry liked it so much that he had Comes With The Fall to open for him on the tour for his second album Degradation Trip. They would turn from 2001-2002 and while on tour Layne passed away. William would come to join Alice In Chains as their “lead” singer in 2006 for a stretch of reunion concerts. From 2007-2008 the band decided to record a new album. It would be their first album of new original music since 1995’s self-titled album.

The album would end up being titled “Black Gives Way To Blue” and release on September 29, 2009. That album would be followed by 2013’s “The Devil Put Dinosaurs Here” on May 28, 2013, as well as 2018’s “Rainier Fog.” As a fan of their work I certainly hope to see them continue on for as long as they feel like they can put out quality music. It’s always something I can turn to and in honesty I found some songs on their newer albums that I didn’t recall that turned out to be damn good and have been added to my AIC playlist. Check these albums out, even if you only liked them because of Layne, it’s worth the time.

I know this post was very light on a lot of Second Life references but I was really feeling the musical mood I was in for it. It was quite enjoyable to sit and talk about Alice In Chains amongst other bands with Andraus and gave me a renewed appreciation for everything about them. I surely hope we see more awesomeness to come from THOR in the future. Hint hint. You can find the rest of the amazing items in the shot above by checking the credits below and before I forget, Happy 2020. Make it better than the one before it.