“Saint Patrick himself would have to deal with pinching on his feast day. His color was “Saint Patrick’s blue,” a light shade. The color green only became associated with the big day after it was linked to the Irish independence movement in the late 18th century.” 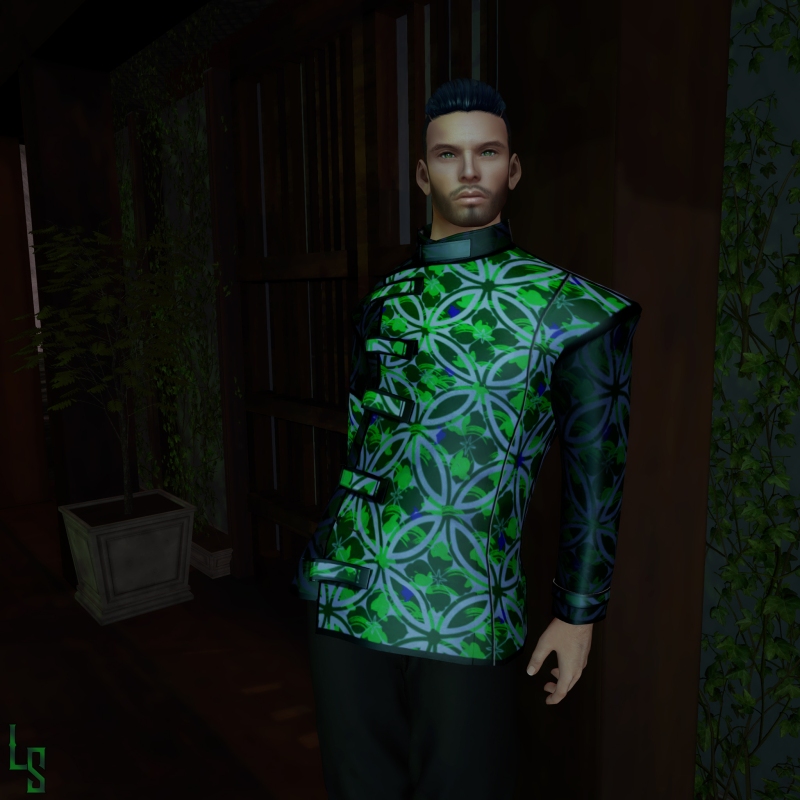 There are so many events going on right now. I’m having a hard time keeping up with what’s where and when it starts and ends. It’s been a wild month and we’re only just at the halfway point now. So where to start, ah yes more new from BakaBoo! You might remember how thrilled I was when I first discovered BakaBoo in February. Ocean does a wonderful job working patterns and colors together and his newest creation is just the latest in a line of awesome. The Baka jacket is available at Swank until April 1st. There are 4 color options to choose from (Black/Red/Blue/Green.) I’m showcasing the Swank exclusive “Irish Luck” because hey my name is Lucky. As you can see it’s a beautiful pattern in blues, greens, and whites. A fitting color way for St Patrick’s Day.

As a man in Second Life, we’ve come to find that there are always going to be less clothing options for us. It’s just the way things go. One thing in particular I’ve had a hard time with is pants that I can use for some upcoming roleplay ideas. I needed something simple but nice. I was quite tickled to see EPOS/Stitched post their newest item for this round of The Secret Affair. The Norjen pants are extremely nice for not only roleplay, but every day wear as well. The coolest feature with them is the ability to make the calves and/or belt area transparent. It helps for RP when you can wear the boots you’d like, or the top you had that was just so perfect for your character. Nothing sucks more then having boots clipping or a shirt. These pants do a wonderful job of making that less likely. They are out now at The Secret Affair in eight different color options as well as the fatpack.

Last but certainly not least, we cannot forget about Pose Fair and Skin Fair. I spent more then I planned at Pose Fair (doesn’t that always happen) but I have so much great stuff to show you over the next week. It’s my first time using an lar [poses] and I must say I’ll be looking into more of their poses. The Rafal Series is an exclusive to the event and at only L$100 it is well worth picking up. I’m also showing off the newest skin from -NIVARO-, Griffin, who is available right now at Skin Fair. You can find more about him in my previous post. Pose Fair runs until March 26th, Skin Fair until the 27th so there is still tons of time to get over and visit them both.