“The beginning of wisdom is the statement ‘I do not know.’ The person who cannot make that statement is one who will never learn anything.” -Thrall. 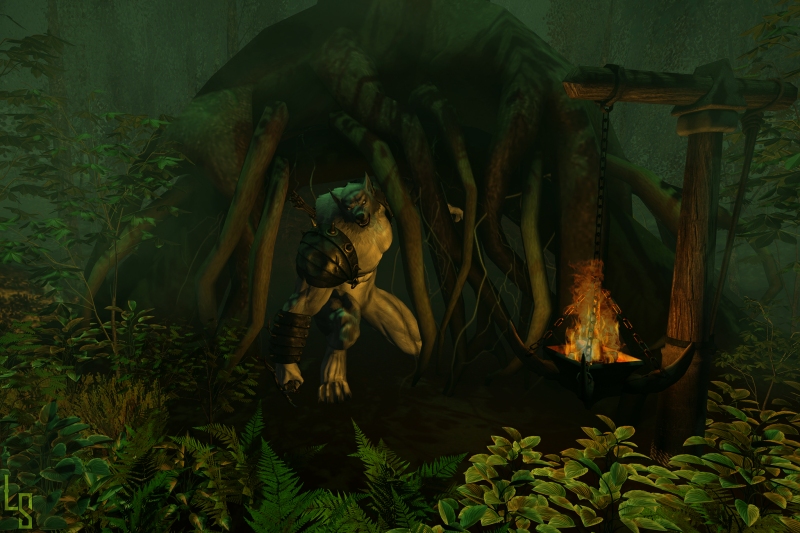 This is a decidedly different post for me. While I usually blog about my Second Life things, I thought that it would be nice to jump to the other thing I do as well. Since Second Life is what led me to it it makes sense to me. That other thing is World of Warcraft. (Note: I have linked to various things through this post for anyone who wants to know more about certain things!) Now I’m sure even those who have not actually played WoW have heard of it. At least most of you. I didn’t start out in the early days of it like some, it actually took me a quite a while before I was convinced to try it. A former relationship spawned my ventures in the world of Azeroth and it did not take long to hook me. I started playing in the middle of Cataclysm (Cata). And yes I stood in the fire, a lot.

I started out on the EU servers as my former partner was from that side of the world so it just made sense to go where they already had an established account. I chose to start out as a hunter as it fit the things I myself liked. Ranged combat has always been my preferred style and having a pet was an added bonus as a new player to the game. I began my adventures as a Blood Elf of the Horde. My time in the Horde was short lived as the server we were on was really dead. I pushed for us to transfer to a new one, but that server, Stormscale, was heavily Alliance dominant so we faction changed. The difference between Alliance and Horde as new player was astounding. Not only is completely different cities and races, but to me, the Alliance players were a bit more helpful. That could just be the server I was on of course. I’ve met a lot of great Horde players, some of which are still friends of mine to this day.

I was mostly a casual player on EU because with the time difference between myself and the servers (6+ hours) it just was not possible to do more. That and I didn’t really know anything outside of the standard things. During that time I discovered that my SL children also were Warcraft players, albeit on the North American servers. The idea of having to completely start over really sucked, but the option to do more things with people that I already knew well was just too good to pass up. I started over on NA servers in January 2014 after the release of Mists Of Pandaria (MoP) as my trusty Worgen hunter Lelantis.

I won’t go through the drag of talking about leveling and such, there’s no sense to that. Looking back on it, playing on the NA servers was the best move in terms of the game that I’ve made. I joined the guild that my children were in, and after getting to a fair point in terms of my gear was asked to fill-in on a normal raid night. Prior to this I had never done anything beyond Looking For Raid (LFR) so I was a bit nervous but the group was good about it. They taught me what I needed to know and while I wasn’t great, I did show enough to earn a permanent spot on the raid team.

My first real raid was Siege of Orgrimmar (SoO), and wow was it something. It was the first time I had been part of a legitimate raid group, and the first time I actually cleared a current raid from start to finish. It wasn’t easy, there were plenty of wipes and frustration, but in the end we managed to get “Ahead of the Curve.” Which meant we cleared the content prior to the next raid being released. It was a pretty exciting time for me as a really new raider.

Not long after that it was announced that Warlords of Draenor (WoD) would be the next expansion. By that time we were tired of re-running SoO, so it was good news that some new things would be coming. I was looking forward to coming in to raid a brand new raid with some knowledge and more experience with my class. Unfortunately time and people would prohibit me from being able to raid so I took about a six month hiatus from WoW. I suppose a break wasn’t a bad thing but it truly was not what I wanted. I started back up at the end of January last year and about three weeks later was asked if I was really back. I of course said I was and fell right back into raiding. It was the tail end of the current raid, Blackrock Foundry (BRF), our assault on Warlord Blackhand‘s operation in Gorgrond. Of course after being out I knew nothing about the place, but the group helped catch me up on things rather quickly.

After four months of farming out BRF the next and final raid of WoD was released. Hellfire Citadel (HFC), in the heart of Tanaan Jungle which went live in Patch 6.2, is the last strong hold of the Iron Horde. For those who haven’t played either at all or in a long time the Iron Horde is the alternate universe Warlords brought together by Gul’dan and pretty much delivered to the Burning Legion. We spent a few weeks clearing out the Normal version of the raid before moving on to heroic. Heroic has mechanics that normal doesn’t as well as higher damage and boss health. After five months of chipping away it we accomplished our team goal of defeating Archimonde ahead of the next tier. We’re currently working our way through Mythic HFC which is the hardest mode for raiding. Three bosses down out of thirteen thus far, progress is slow, but we enjoy it most of the time.

Starting late this year when Legion releases, we’ll take our fight to the Broken Isles to face the Burning Legion head on. The Tomb of Sargeras and The Emerald Nightmare (TEN) await us as does an old foe. Who knows what adventures are ahead of us, and how many of us will still be together at that point. I’m looking forward to it as I’ve made a lot of good friends in my time there. If you’re a current player on the NA servers and want to find me sometime, Lelantis#2468 is my battletag. I’m currently a member of Velocity on Alleria-US. Until we meet again!